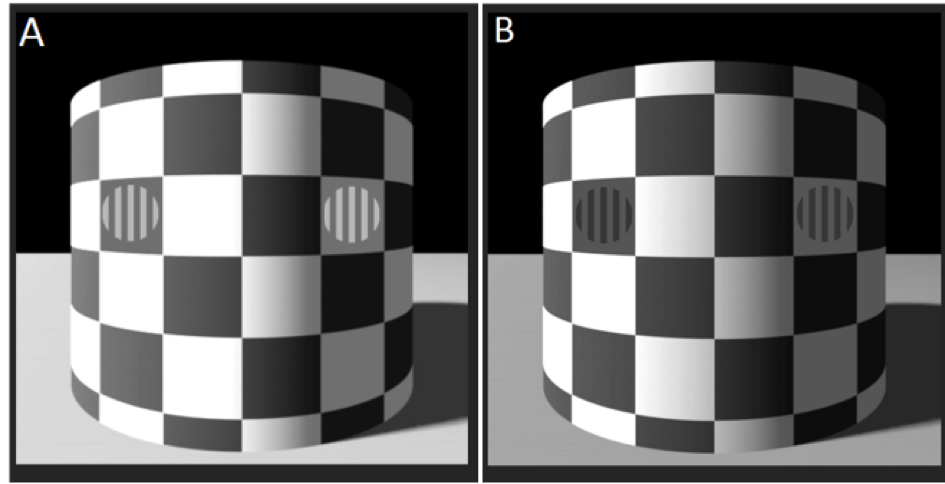 Does the perceived contrast of a grating vary with the luminance or lightness of its background? Suppose that we superimpose grating patterns on patches with equal luminace but different lightness (see Figure: in each image, the squares with gratings are identical), what happens to the perceived contrast of those gratings? Is contrast perception affected by context-dependent lightness? In this series of studies, using psychophysical and functional magnetic resonance imaging (fMRI) methods we seek answers to these questions. Read more

As the sensory information we experience is often ambiguous or noisy, we would expect that recognition of a stimulus may sometimes be very difficult, because there may be several interpretations of it. However, our visual system usually come up with a single interpretation very quickly, because our prior knowledge facilitates perception while we make decisions. In this work, we investigate how prior knowledge and expectations affect early visual processes, which is distinct from motor and cognitive components of a decision-making process. We use psychophysics, computational modeling and fMRI to unravel the effect of expectation on visual perception and the computational mechanisms underlying those effects. Read more

Center-surround interaction is a common working principle in the visual system. It is present in nearly all levels, from the retina to higher level cortical areas. These interactions lead to suppression or facilitation of the neuronal activity. There are, however, still many unanswered questions related to this mechanism. For example, how the extent of spatial attention affects this center-surround interaction in motion perception in humans has not been systematically studied before. In this project, using a well-known motion effect, and behavioral and fMRI methods, we investigate the interaction of center and surround in the human visual system.

Prolonged exposure to a disc (adapter) of a certain size leads to misestimating the size of a subsequently presented disc (test). This phenomenon is known as size adaptation or size aftereffect. If the adapter is larger than the test, the test disc is perceived smaller than its veridical size. Conversely when the adapter is smaller than the test, the test disc is perceived larger than its veridical size. In previous studies in literature, the test stimulus has been always presented at the same location as the adapter stimulus. Spatial extent of this size aftereffect has not been systematically studied, and what happens in the rest of the visual space is not known. In this project we are conducting several psychophysics experiments to investigate the effect of adaptation across the entire visual field.

Non-linearities in the BOLD fMRI response are well-known. For example, one cannot linearly model the BOLD response to a long visual stimulation using responses to short pulses of visual stimulation. Or, if the stimuli are presented with too brief inter-trial intervals, one observes non-linear interactions (refractory effects). Typically in the studies testing linearity, the stimuli are presented in exact same spatial locations. The interaction between spatial location and time is not systematically studied previously. In this project, using very high temporal resolution fMRI (MB-EPI, TR = 250ms), we investigate interaction of time and space in their effect on the (non-)linearity of the BOLD responses.

In our lab, we have been routinely using the phase-encoded analysis methods for retinotopic mapping in early human visual cortex. This method is quite efficient in delineating the boundaries between visual areas (e.g. between V1 and V2, V2 and V3, so on). Using this method, however, we cannot get any information about the receptive field (RF) properties, such as the RF size. A more recent technique, population receptive field estimation method, both allows us to identify different visual areas, and provide information about the receptive field properties. In this project, in a series of studies, we work on optimizing the MR scanning parameters and stimulation protocols for the pRF method. Our goal is to adapt the method to our 3 Tesla Siemens scanner system and its peripherals (e.g. our stimulus delivery system). The method will later be used to investigate properties of the visual system in other projects.