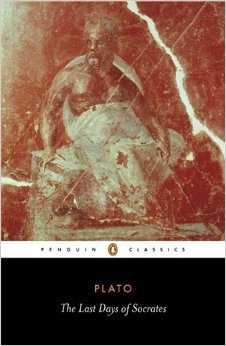 Plato, the Last Days of Socrates

This text is a collection of Plato’s shorter dialogues, centered on the trial for impiety and execution of Socrates in Athens in 399 B.C.E. These events, and Socrates’ life itself, were defining moments in the history of philosophy. In the dialogues contained in this compilation, we see the questioning and analytic method employed by Socrates as he converses with many different characters. In the Euthyphro, Socrates is shown in an attempt to learn the meaning of piety right before his trial. Plato’s Apology, gives us an account of the speech of Socrates at the trial. It shows us a man of courage and conviction. In the Crito, Socrates refuses to escape from his punishment, arguing that the only consideration of consequence in deciding how one must act is a consideration of justice. In the Phaedo, we see Socrates on his death bed, passing his last hours in a philosophical discussion on the immortality of the soul. Here we see again Socrates’ courage in the face of death, and are presented with a number of important elements of Plato’s more mature philosophy, such as, the theory of recollection, Forms and how they differ from their particulars, and a long myth of the soul’s fate after death.