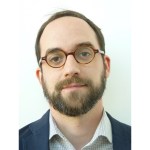 Etienne Charrière received his PhD in Comparative Literature from the University of Michigan. Before coming to Bilkent, he was a Postdoctoral Fellow at the Koç University Research Center for Anatolian Civilizations (ANAMED) in Istanbul. Working with Turkish, Greek, Armenian, and Judeo-Spanish (Ladino) texts, he specializes in the study of prose fiction in the late Ottoman Empire and in the early Republican era. Professor Charrière is jointly appointed in CCI and in the Department of Turkish Literature.